Diagnosed with colon and brain cancer, Hunter Jones gave herself time to cry. But not for long.

There came a moment, just after her diagnosis of two cancers — in her colon and brain — that Hunter Jones rejected fear in favor of optimism and a fighting spirit.

Today, the 21-year-old, who received the dual diagnosis while in high school, credits her positive attitude, her family and friends, and her care team at Geisinger with her full recovery and a cancer-free life.

“I was mentally prepared to deal with colon cancer when they found the brain tumor, too,” recalls Ms. Jones, of Dallas. “I thought, ‘I’m going to fight. I’m going to face this head on.’”

Ms. Jones’ journey began in 2015, when routine screening before a blood donation revealed that she was severely anemic. Too anemic to donate.

Her low hemoglobin levels didn’t make sense to Ms. Jones or her mother, a registered nurse, who was concerned and requested more bloodwork. This confirmed the diagnosis of anemia — a surprise, since Ms. Jones wasn’t exhibiting any signs or symptoms.

The discovery prompted Ms. Jones to finally admit that she’d had stomach issues for about a year — something she’d avoided sharing with her mother. “It’s embarrassing, as a 17-year-old girl,” she says, adding that she was also afraid her physician would order a colonoscopy.

Ms. Jones was referred to Geisinger Pediatric Gastroenterology, where an endoscopy led to a diagnosis of stage IIIC colon cancer. That meant she didn’t just have cancer, but it had spread into the outermost layer of her colon and possibly nearby lymph nodes, too.

A frightening diagnosis, on its own. Especially for someone so young.

Then, when Ms. Jones was being prepped for surgery, a discussion with her anesthesiologist raised new concerns about numbness in Ms. Jones’ legs after sedation used during the endoscopies.

A series of neurological tests revealed a brain tumor

Ms. Jones allowed herself a half hour to cry about the latest setback of a brain tumor — then she came back even more determined to fight both cancers. And, in spite of undergoing two surgeries and other draining cancer treatments, she also insisted on finishing her senior year of high school.

“My goal was to make it to prom and graduation,” Ms. Jones says. “I tried to stay as active as possible. I didn’t want cancer to take over my life.”

Not only did her team of physicians work together to make sure she attended prom, she also went on to Marywood University and earned a dual degree in information security and computer science.

“They definitely care about their patients,” she says. “When I was an inpatient, Dr. Focht and his wife made dinner for my mother and me and brought it to the hospital. And when I developed blisters on my feet — a side effect of my chemotherapy — Dr. Ramdas worked hard to adjust my dosage and eliminate the blisters, just so I could wear my heels for prom.”

Dr. Focht says he’s grateful for the opportunity to care for such a “remarkable young lady.”

“Nothing can hold Hunter back,” he says. “I’m a better physician because I had the privilege of helping to care for her.”

Dr. Focht adds that, despite tackling cancer twice, Ms. Jones is “always looking to give back to others.”

Starting a nonprofit to help others

Ms. Jones has started a nonprofit, the Hope for Hunter Fund, which provides “chemo cozy” jackets for pediatric and young adult oncology patients. The fleece jackets have hidden access points for implanted ports used to deliver chemotherapy drugs, so the patient doesn’t have to undress to receive treatment.

“It makes a terrible situation a little better,” she says, adding, “It helps to keep a good outlook. I’ve learned to find a positive in the obstacles I’ve faced, regardless of how small the positive might be.”

“My goal was to make it to prom and graduation. I tried to stay as active as possible. I didn’t want cancer to take over my life.”

Powerful, compelling, inspiring, gut-wrenching, heart-breaking — or a combination of all the above — we’d love to hear your story. 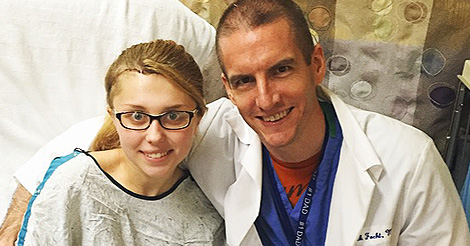 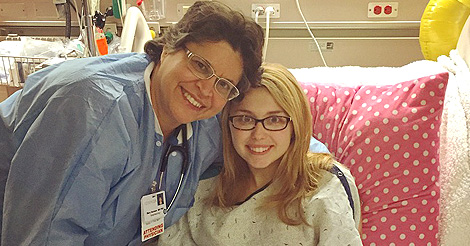 Prior to surgery to remove cancerous polyps, Hunter was diagnosed with a frontal brain tumor 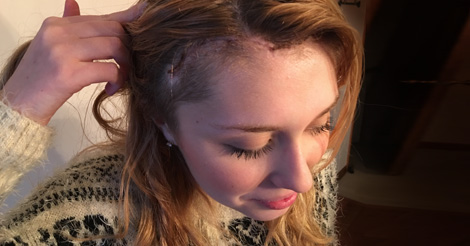 Hunter continues her academic journey and touches the hearts of many