Wondering about side effects if you get the COVID vaccine? Know the most common ones so you’ll be ready.

Most of us don’t doubt the benefits we’ll get from the COVID-19 vaccine — it’s protection in an injection. Or two, actually.

But the side effects from those injections are what’s on some people’s minds before they make their decision. So we got reactions from a group of Geisinger staffers about their reactions. As you’ll see, they run the gamut from “nothing at all” to “pretty rough.” And that’s all perfectly normal. Every person’s body reacts differently to the vaccine. But the one thing we all have in common: Afterward, we can fight off the virus that’s sickened and killed millions of people worldwide. Best side effect yet? We think so.

Embrace the immune response — it's working in your favor.

Your friends’ and neighbors’ side effects, in their own words

Mitch, Shamokin: I had light arm pain and felt very sleepy a few hours after the first shot. No side effects the next day. With the second, I felt fine right after my shot, but the next day I felt like I had been hit by a truck — into another truck. Body aches, 100-degree fever, the works.

A.J., Scranton: After the first dose of the vaccine I just had a sore arm. After my second dose I had the same soreness in my arm as the first dose, but this time with some body aches and a headache that was gone in about 12 hours.

Beth, Lewisburg: I felt mildly fatigued and achy after my first shot. I spent the day curled up on the couch, but it wasn't bad. My second dose was rough. Fever, chills, chattering teeth, aches that left me unable to get comfortable in bed. But it didn't last long – I was up and about in about 12 hours. So worth it!

Mark, Coal Township: Soreness in my left shoulder (where I got the shot) for about two days, similar to flu shot. After the second, mild fever, chills, body aches, cold sweats, headache. Started about 6 hours after the shot. Subsided within 24 hours.

Kayleigh, Shavertown: Immediately after my first dose, my arm hurt. I made sure to move it around throughout the day, which helped a lot. Later that night I had a mild headache, but I woke up the next day good as new (with a slightly sore arm). After my second dose, my arm became sore immediately and I had a headache that night and into the next day — but that was it!

Lori, Williamsport: No side effects at all from either the first or the second dose (and no more than a 3-minute wait to get my vaccine).

Maggy, Lancaster: First and second doses: Just a sore arm and a little fatigue. I was fine within 24 hours.

Betse, Selinsgrove: For two days after the first vaccine, my arm was sore — a little more than it normally is with the flu shot. No other symptoms except excitement over getting vaccinated. For two days after the second dose, my arm was sore and slightly hard to touch at the vaccine site. I was tired and feeling a bit run down, but nothing significant. Absolutely worth it, given the alternative. 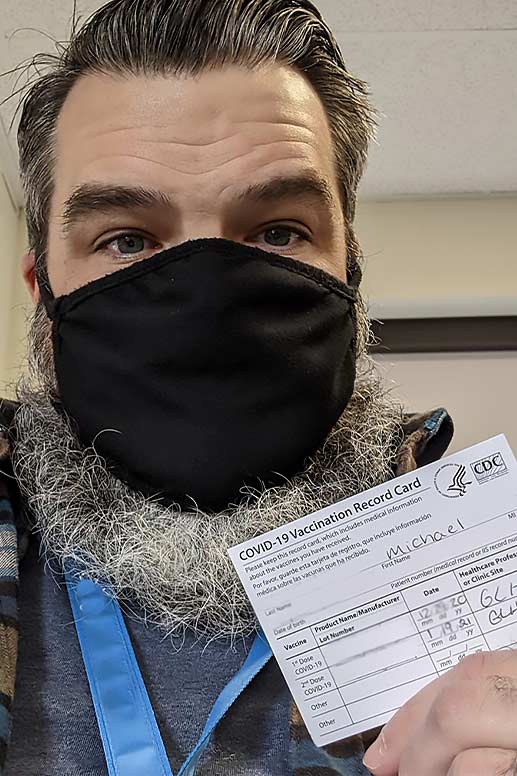 I had no reactions to the first dose, not even soreness in my arm. After receiving the second dose, I felt a little funny and lost all my facial hair. (Okay, I actually shaved.) In all seriousness, I felt no difference between the first and second dose and actually have had worse arm soreness after annual flu vaccinations. 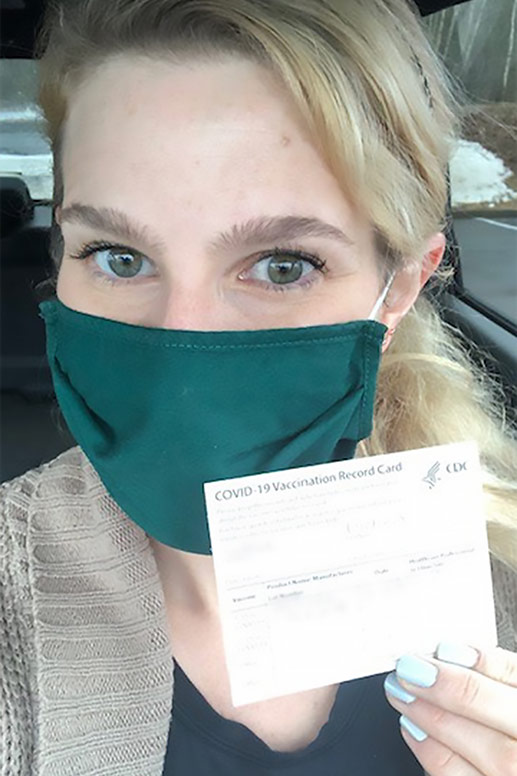 First dose: My arm was pretty sore for a few days at the injection site. Second dose: I had a headache, chills and a low-grade fever, but after a day of rest I felt back to my healthy self and excited knowing I am doing my part to help end this pandemic. 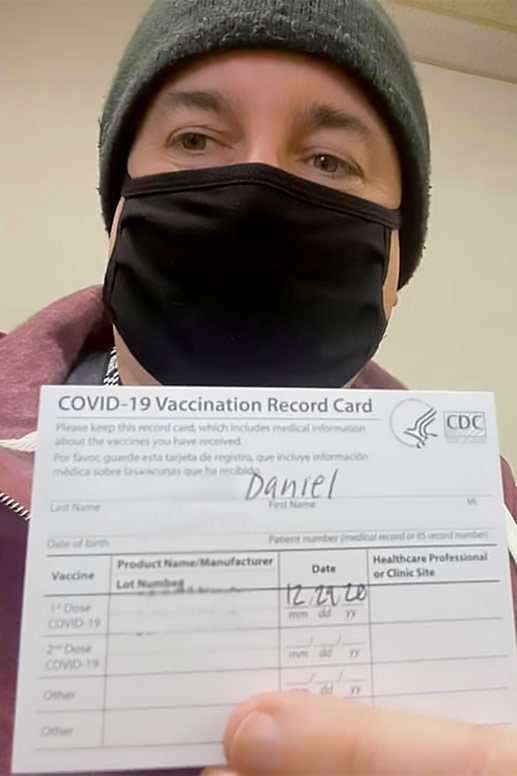 I had normal arm pain similar to any other shot. About 12 hours after my second dose I had chills and fever. I took some Tylenol and got a good night’s sleep. I was fine after that.

Jess, Mount Carmel: My only side effect from the first dose was a sore arm. It felt just like it did when I received the flu vaccine. With my second dose, my arm felt sore a couple hours after receiving the vaccine. Around 22 hours after receiving the second dose I felt off and had bouts of chills and sweats, but never a fever. I took some acetaminophen and slept for two hours. I woke up and felt tired and continued to feel off the rest of the night. The next day I felt completely back to normal with just a slight soreness in my arm for two days.

Matt, Wapwallopen: First dose: About 12 hours after getting it, I got pretty tired, but slept it off and felt great the next morning! Second dose: I'd say it was unpleasant but definitely manageable. I got it in the morning and by mid-afternoon I started to get a strong headache, but certainly not on the level of a migraine. I woke up the next morning feeling well, but did start to feel off a bit in the afternoon. That night I had some chills, but again, slept it off and felt back to normal within 48 hours of getting the shot. Now I'm thrilled to be protected and can't wait for others to be able to get there too!

Alexa, Watsontown: After my first dose, my arm was quite sore (worse than a regular flu shot for me) and I had a headache and some fatigue that went away after the first day. After my second dose, I experienced more arm soreness at the injection site. The following day I had a persistent headache, some fatigue and muscle aches, but by the second day, I was good as new.

Jeanne, Dickson City: After the first dose, I had chills and a slight headache for about 3 hours. I felt fine by 5 p.m. and went to the gym. After the second dose, my arm hurt. A lot. But a trip to the gym helped. Within 24 hours of the shot, I started feeling run down. I had a slight headache that got progressively worse, my teeth hurt and I had waves of nausea. It almost felt like I had a sinus infection. My symptoms lasted just over 24 hours and resolved by early Friday afternoon.

Kimberly, West Decatur: The day after my first vaccination, I only had a sore arm for a day or two — the same as when getting the yearly flu vaccine. The morning after my second dose of the vaccine, I woke up at 3 a.m. with a severe headache. I eventually slept for a few more hours, then woke up with severe body aches as well. I took Tylenol Extra Strength every 4 hours, and the aches and headache finally subsided around 1 p.m. I had a mild headache off and on for another day, then felt fine. 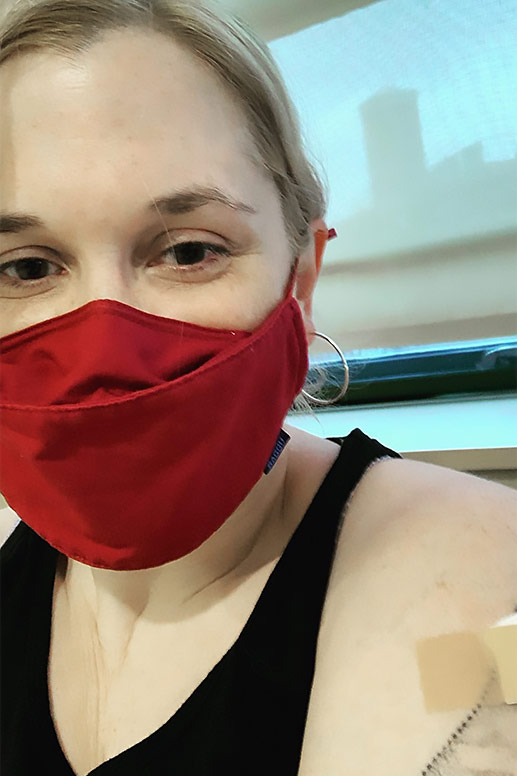 After the first, I had a sore arm at the injection site for a couple days (same thing happens when I get the flu shot). With the second, I got the shot at 10:20 a.m. on a Saturday. Developed a sore arm again, which stayed around for a few days. I felt fine Saturday and most of Sunday, except for some fatigue. Around 9 p.m. on Sunday, I started feeling achy and getting chills. I took my temperature and it was 99.6. Went to bed early that night, and woke up feeling fine on Monday morning. 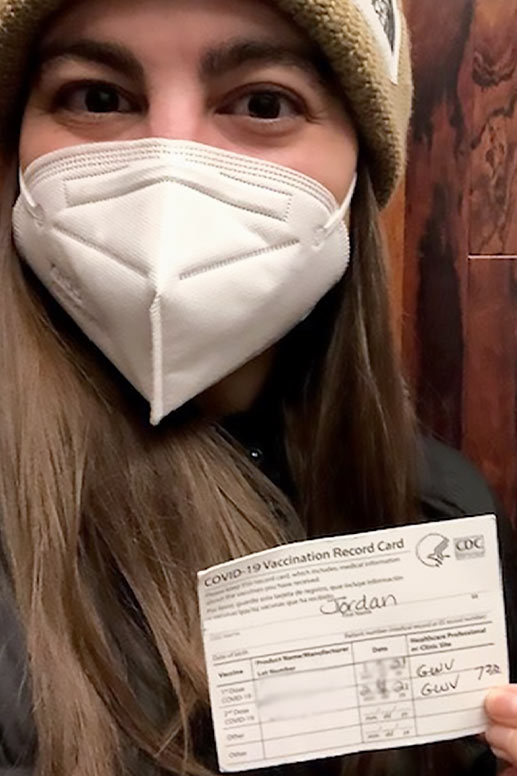 After the first dose, my arm was super sore for about 2 days — like hurt to move/lift sore. I got my vaccine early in the morning and it was the most painful that night. I ended up taking Tylenol, which helped significantly. My second dose was a little different. Although I experienced arm soreness again, I got the added bonuses of a low-grade fever, body aches, chills and overall just feeling “blah.” Luckily, those symptoms only lasted about a day or so and then I was back to normal.

Bess, Montoursville: For my first shot, no notable side effects aside from a sore shoulder. I followed the recommendation of getting it in my dominant arm, so it would work itself out faster. My second dose, I wasn’t as lucky. In addition to the sore shoulder I had body aches and chills. On day two I broke out into hives, and had to go to my doctor to get something to knock it back. All is well now, but I did have to report the adverse effect — albeit a mild one. Still, worth it to not risk COVID in the future!

Dan, Danville (yes, we have two): With the first injection, just a sore arm. I felt fine for the first 12 hours after the second injection. But then I started to get severe chills and a fever. I was in bed for the next 15 hours under multiple heavy blankets and a sweatshirt, and just couldn't get warm. My entire body ached all over. And then after 15 hours, almost as suddenly as it started, the chills, fever and aches were gone.


Kamila, Blakeslee: After the first dose, my arm was a little sore only when touched. I got my second dose at 9 a.m. on a Friday and felt normal for the majority of the day. Around 8 p.m. I started to develop flu-like symptoms of body aches, chills and a headache. Since it was already evening, I made myself some tea with honey and lemon and went to bed. In the morning I woke up with a little bit of a headache, which I took an Aleve for. I didn't notice any soreness in the injection site either. By 10 a.m. I was feeling back to normal and had a great weekend.

Marc, Danville: After both my first and second doses of the Moderna vaccine, the only trouble I had was arm soreness from the injection. I received the first dose in the left arm, the second dose in the right arm, and in both instances the arm soreness lasted no more than 48 hours. I didn't have any immune response to the vaccine. I'm thrilled to have received the vaccine, encourage everyone to do so, and will continue wearing a mask and doing my part to get society back closer to what we all had prior to 2020.

Jessica, Danville: After my first shot, my upper arm was sore for a day or two (like after a flu shot) and I had some muscle pain in my lower back. With the second dose my arm ached a bit right afterward. About 12 hours later, I had mild chills and fever, and I felt really tired — but it was all gone by the next morning.

Linda, Northeast PA: First shot: Only experienced a sore arm for about 24 hours. After receiving the second dose: Sore arm and nausea almost immediately, and for a couple of hours afterward. About 6 hours later, I had body aches and was really tired, in addition to the soreness in my arm. I slept for about 12 hours and the next day I was fine.

Brian, Hershey: For both the first and second doses, just minor muscle ache localized at the injection site.

Lonnie, Dallas: After the first shot, I had arm soreness. After the second, I only felt a little groggy — like I was going to get sick. That feeling did not last long and I was fine.

Katelyn, Berwick: After the first dose, I had a severe headache that was gone by the next day, and a sore arm for about 2 days. With the second, I had about 2 days of headache, sore arm, muscle aches and fatigue.