When his cancer came back, U.S. Army veteran Randell Ward was referred to palliative medicine. The care he received gave him the chance to make the most of the time he had left. His fiancée, Maxine, shares his story.

Randell (Randy) Ward of Mount Union, Pa., loved life. And his favorite things were the simple pleasures, like being outdoors gardening, hunting or fishing. Tinkering around his garage. And spending time with those he loved.

For years, Randy couldn’t do the things he enjoyed. He had throat cancer believed to be linked to exposure to Agent Orange — a herbicide used by the U.S. military to clear vegetation — when he served in the Vietnam War.

“He proudly served in the military for 22 years,” says Maxine Gardner, Randy’s fiancée.

And Randy focused on finding joy in each day, even though the journey wasn’t easy for him, she adds.

When he was diagnosed with laryngeal (throat) cancer, part of Randy’s treatment plan included surgery. “They removed part of his jaw, glands, voice box and part of his tongue,” says Maxine. He also underwent chemotherapy as he adjusted to life after surgery, which involved learning how to talk again. “Despite everything, he dealt with it in such a positive manner.”

After several trips to Pittsburgh to correct issues with his voice prosthesis (the device that helped him speak and breathe), Randy found a doctor close to home in Huntingdon, Pa. “This made all the difference for him,” says Maxine. “He finally had a doctor who knew him and who could help him with his prosthesis.”

With his cancer in remission, Randy got back to enjoying the things he loved doing most.

In October 2018, Randy began having pain in his back and legs that prompted a visit to the doctor. A scan revealed that his cancer had returned and spread. “He had tumors on his spine and his pelvis,” says Maxine. “There were too many spots for radiation, and he didn’t want to go through chemo again.”

Randy decided to live out the rest of his days the best he could without cancer treatment, but his pain kept him housebound. To get back to those simple pleasures, he needed some help.

Randy got the help he needed when he was referred to Dr. Nicki Vithalani, palliative medicine physician at Geisinger Lewistown Hospital.

“Palliative medicine provides an extra level of care and support for anyone facing serious or life-threatening illness,” explains Dr. Vithalani. “Our goal was to improve Randy’s quality of life and manage his pain so he could live the rest of his days to the fullest.”

And for Randy, that meant getting outside to fish and hunt again. “Once Dr. Vithalani found the right medications to manage his pain, Randy was able to go out hunting and fishing again — with great success, too,” says Maxine.

He also spent time in his yard, mowed his lawn, went to cookouts and enjoyed Christmas day with his family and loved ones. “He loved Dr. Vithalani. Her care gave him a second chance to enjoy his life,” she added.

Compassionate care made all the difference

Randy knew he wanted his final days to be spent at home with hospice care. “Dr. Vithalani was an angel and was great with him,” says Maxine. “She would call and check in daily with me and his hospice nurses. She would adjust his medications, see how they were working and adjust again, as needed.”

In early July, Randy was admitted to the hospital with a heat stroke as well as sepsis and double pneumonia.

“We got him home and comfortable,” says Maxine. “That’s what he wanted. And Dr. Vithalani kept calling every day to check in.”

On Aug. 1, 2020, Randy passed away at home surrounded by everyone who loved him, including his devoted fiancée Maxine.

“We talked about how to find joy in each day, no matter how many days we have left,” says Dr. Vithalani. “I think Randy did just that.”

Although terminal illness is incredibly difficult to face, Maxine says, “if you can experience it with a caring doctor like Dr. Vithalani, it makes all the difference. Palliative care makes it easier for people — they can still have their dignity and they can still call the shots throughout their care.”


If you think palliative care sounds right for you or your loved one, ask your doctor to refer you to a palliative medicine provider. To refer a patient to Dr. Nicki Vithalani, call 717-242-7297. 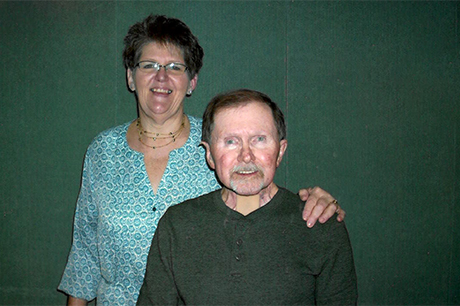